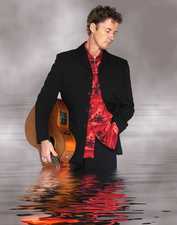 Bruce enthralls his audiences with not just a phenomenal level of technical brilliance, but perhaps even more importantly, with an apparent instinctive ability to absorb and understand, then master and consummately deliver all of the musical styles that inspire him.  He is the chameleon of guitar and, a natural performer. “Displays technical brilliance and mastery of genres with an admirable absence of ostentation. Mathiske is the finest all-round guitarist this country has produced”- Tony Hillier, The Australian
Bruce’s performances and workshops demonstrate the diversity of his chosen instrument.  His use of the guitar to become its own orchestra, and his unique style of playing bass, rhythm and melody simultaneously has led to standing ovations and sell-out concerts all over the world.  “The notes explode from both hands leaving you to wonder if there is another Mathiske in the wings. By the time he had added the didgeridoo and wowed us with outrageous harmonics from far flung corners of his guitar, we were all his.” The Scotsman Edinburgh Festival
His live shows are a renowned experience, one that he continues to bring to major concert and festival stages world-wide including the Edinburgh Festival, Glasgow International Jazz Festival, Nashville Guitar Festival, France’s International Guitar Festival, the London Music Festival, and in his homeland at the Sydney Festival, Bellingen Global Carnival and the Woodford, Port Fairy and National Folk Festivals plus many more. Bruce is among the few Australian musicians to have been invited to perform and host workshops and a concert at America’s prestigious Yale University.
He has overcome many obstacles from left sided paralyses after being shot in the head to breaking a finger a few days prior to a major tour to go on and be acclaimed as “A master guitarist, the best in Australia!” by The Sydney Morning Herald.

Born and raised on a modest wheat farm in the Mallee region of northern Victoria, Bruce enjoyed the freedom and space of a typical country upbringing with his brother. His first challenge in life was to suffer an acute bout of dermatitis as a toddler, causing him to be hospitalised at the Royal Children’s Hospital.  Forced to wear steel splints on his tiny arms for 3 months to prevent him from scratching, Bruce used to amuse and annoy the hospital staff by banging the splints together, making a non-stop percussive rhythm sound.  Thankfully, the dermatitis gradually disappeared; the love of rhythm did not.

At age 7, and inspired by his cousin Trev, “the 3-chord wonder” Bruce picked up his very first guitar, and fell instantly in love. He played the instrument incessantly until he broke his arm later the same year, falling backwards off a fence in the stockyard.   The recovery time spent in the cast thwarted Bruce’s burning desire to play on his beloved guitar.  He patiently waited though, continuing as soon as he was able. The situation was a portent of what was to come.

Joining his first rock cover band at 13, performing at local school and football socials, Bruce eventually moved to Bendigo at 17 to study Classical Guitar with respected teacher Don Charleton.  At the same time he completed his apprenticeship as a boilermaker, making artillery parts at the Bendigo Ordinance Factory.

A SERIES OF NEAR DISASTERS

On a hot summer night in February 1981, Bruce, aged 18, and some friends ventured out for a night of spotlighting rabbits.  It was to be a fateful evening.  During a chase, and at the exact moment Bruce moved, one of his mates fired his gun, and a .22 calibre bullet entered Bruce’s skull.  The force of the bullet knocked him to the ground.
Flown to Melbourne’s St Vincent’s Hospital, Bruce and his family were horrified to learn that his skull was shattered and that his left arm was completely paralysed.  It was a dreadful blow to a young man already so musically gifted.  Surgery was performed to reconstruct the splintered fragments of Bruce’s skull, and although the operation appeared to be a success, doctors could not predict if the paralyses would remain, or to what extent.
For almost 8 months after the accident, Bruce couldn’t even hold a fork to feed himself, and plucking a tune seemed a distant memory.  However, while surgeons were unsure whether he would ever regain full mobility, Bruce was never in doubt.
"I would watch my arm flail around in front of me without any control," he says. "That was quite frustrating, but I was determined to get it together by doing exercises to get my feeling and movement back."
Although hindered by his immobility; the guitar was both the tool and the tonic to begin his way back.  Bruce worked tirelessly on restoring the use of his arm; his fearsome levels of determination and persistence amazed everyone around him.   Slowly he started to make progress, and kept at it, the improvement gradually becoming more and more pronounced.  10 hours of practice a day, or as Bruce calls it, “my physiotherapy” eventually led to an almost-full recovery.
Then, almost 90% recovered, Bruce was struck down with an attack of Hepatitis A and bedridden for a further 4 months.  It was a bitter blow, with yet more to come.  During recovery from the Hepatitis, Bruce lost all of the skin on his hands, rendering him helpless once more.
"The hepatitis was worse than being shot because both my hands were just pink, raw blobs. That laid me up for months and months. I don't know how I got it ... maybe I was still weak from all the stuff that went with getting shot. The doctors thought I might still have some lead or bone fragments floating around in my head that polluted my bloodstream."
To no one’s surprise this time, Bruce again recovered his fighting spirit and good humour and persevered. Bruce has often stated that if not for all of this time spent practicing scales and arpeggios in hospital, he would not be the guitarist he is today.
In fact, 20 years after his arm was paralysed, one of his boisterous boxer dogs broke the ring finger on his all-important left hand.  With a huge concert tour booked and a live recording of a concert for Radio National’s Live On Stage program only a couple of weeks away, Bruce was determined not to cancel.
In record time he re-learned his entire repertoire for the tour so he could play whilst not using the broken finger, leaving the tour and live recording to go ahead as planned with no-one the wiser.

BEGINNINGS OF A CAREER

At 21 and by then completely recovered, Bruce continued to study guitar, this time Jazz Guitar with Neville Khan on the Gold Coast.  Bruce received his Diploma in Music in improvising, arranging, composition, theory and sight reading.  It was at this time that Bruce started to perform professionally with various bands to support himself financially while he continued his now ingrained habit of 10 hours practice a day.
During this period, Bruce heard the brilliant Chet Akins for the first time, and the possibilities of fingerstyle guitar opened up for him to explore.  A decade later he was able to meet and perform with Akins and another of his musical heroes, Latin guitar great Charlie Byrd; moments Bruce still considers highlights of his career.
For the next 6 years, Bruce remained completely committed to his craft, refining his skills for 70 hours a week.  The work was paying off, with his profile starting to rise both in Australia and internationally. The word of mouth about Bruce’s live shows and the critical acclaim received for his albums saw invitations to festivals and special events begin to regularly arrive.